an article by Ross Mac
In the image you will find,  There are 3 manifolds across the top. Small, nearest the front is intake which gets feed from Webasto and the engine.  It has the main output to larger front disbursement manifold to the left.  Controlled by the Webasto Valve solenoid.  Also, it has output (out the bottom) to Hot Water heat exchanger.
If the engine is running, the water goes to the front, top of the intake manifold (green hose) where it then goes to the top of the heat exchanger and the out the bottom to the return manifold which is across the back, behind the other 2. The water then returns to the engine out the top back green hose at the right.
If the Webasto is running, it gets mucky... From the webasto into the intake manifold at the right front and as before to the HW heat exchanger.  With the increased pressure (webasto pump) the water goes up the forward green hose to the engine, preheating it. Returning via the back green hose ????
When a thermostat's mode is changed to Furnace and the thermostat is "Calling" the webasto valve is energized and the flow goes to the disbursement manifold. Note here that if you leave the toilet room or basement webasto thermostat on, that solenoid remains powered and hot all the time. (It is easy to leave the bay thermostat "Calling" as it appears to do nothing.) 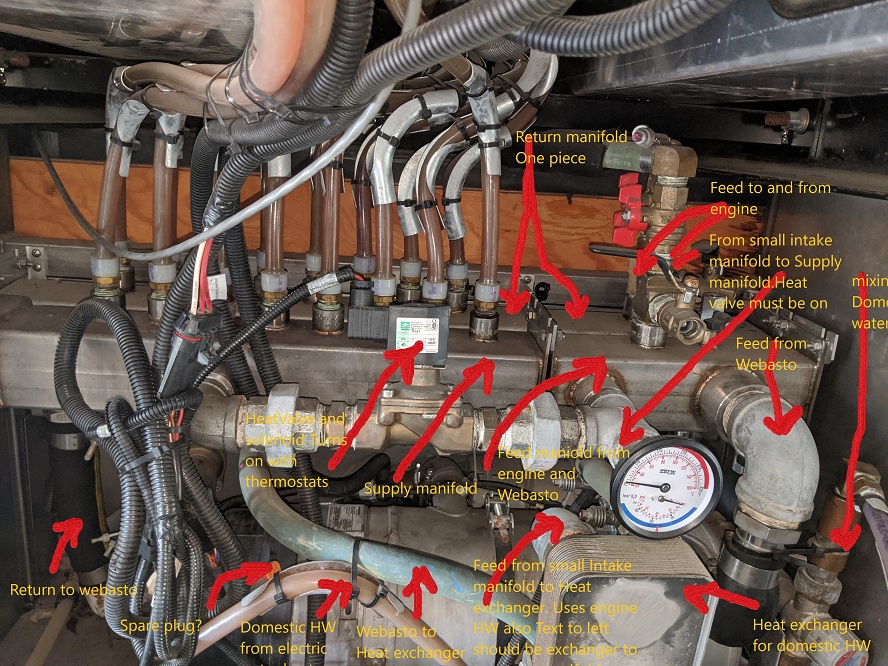 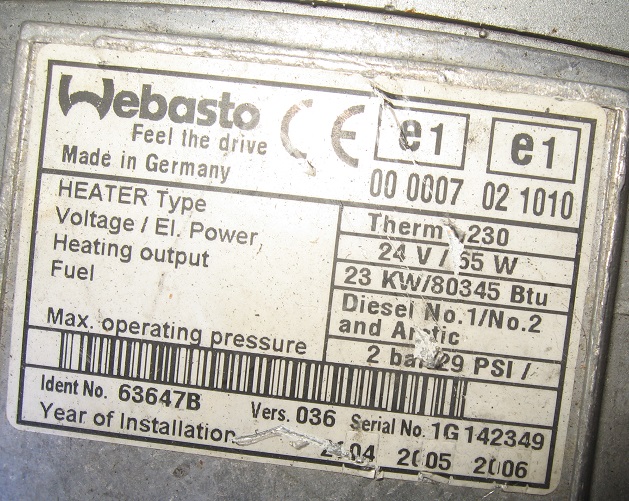 When the thermostat is in Furnace mode, Webasto off and the engine running, the disbursement manifold gets hot.  I don't know if the flow is enough to make the area heat exchangers very warm but regardless, the fans don't come on.  If driving, the engine heat would reduce the dependency on the webasto providing all the heat.  The flow rates to/from the engine would be higher.  It would be resonable that the hot water from the engine would be enough to keep the webasto  burner from igniting.
(May be wishful thinking)
The area fans only operate when the webaso is ON.
DISCONNECTED solenoid- It appears that that solenoid is on the return line from the internal heat exchanger in the electric hot water tank.  The feed to the electric HW tank is from the intake manifold.  I connected the line that was disconnected and obviously had flow. Problem is that the power to the solenoid is always hot.  It would seem best to simply remove the solenoid (As it is in Jeff's I believe).  It would be good to heat the hot water tank for later use.
Some owners like the idea of taking the engine out of the loop.  Taking the engine out of the loop by closing both valves, I think is dangerous from a pressure standpoint.  (I think there is another valve in the line in the engine compartment.)  Closing just one valve would probably keep the pressure as in the rest of the system, yet stop the engine from being a "Heat sink" while parked with the webasto running.  If closing the single valve worked, then it would be useful is one was staying at a cold site for a week or more.  BUT you would lose HW while driving, engine pre-heaing ability and the help of the engine in heating the coach unless the closed valve were reopened. 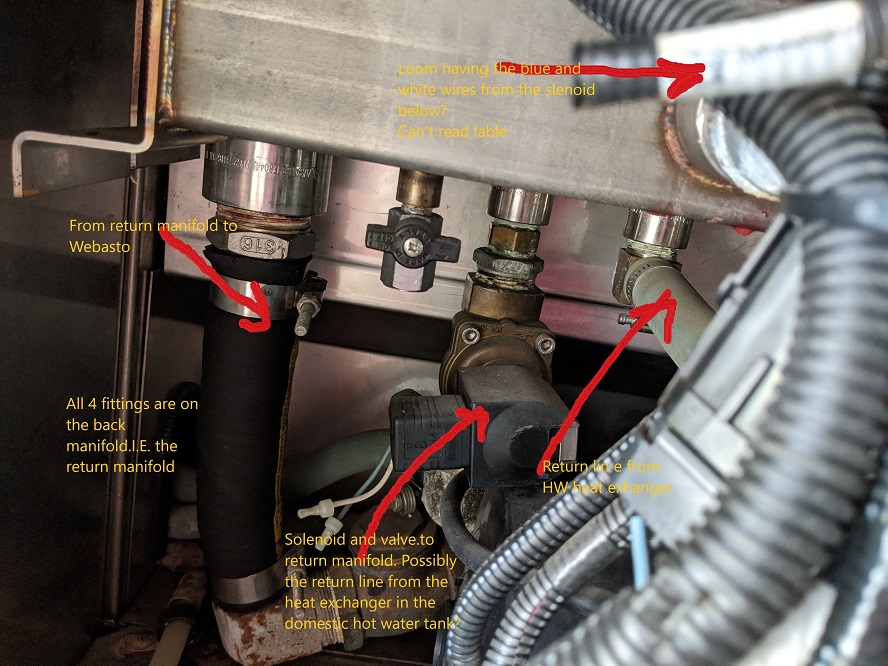 The domestic hot water from the electric hot water tank flows to the webasto heat exchanger (warming it), then to the mixing valve and on to the Mana-block, where it then goes to the faucet or shower. No wonder it takes a while to get hot water at a faucet.
Let me know of errors. Can someone read their label  on the loom?
Ross